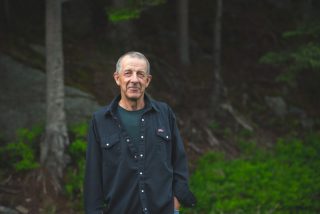 END_OF_DOCUMENT_TOKEN_TO_BE_REPLACED

“Wherever you went, you either walked or rowed on Change Islands. Everybody had a punt,” said Calvin LeDrew. Born in 1942, his father Harry was a fisherman and boat builder from Change Islands, and his mother, Lucy (White) was originally from Comfort Cove. Calvin moved to Purcell’s Harbour on South Twillingate Island in the 1970s and spent his life working as a fisherman. “I’ve been at everything clear of the shrimp, I was never at that. Cod, turbot, lobster, mackerel, herring, squid… whatever you could make a dollar at,” he said.
END_OF_DOCUMENT_TOKEN_TO_BE_REPLACED

END_OF_DOCUMENT_TOKEN_TO_BE_REPLACED

Josiah Bourden, Eric’s great-grandfather, moved from Durrell on the northern coast of South Twillingate Island to Bayview (Maunel’s Cove), a distance of about five kilometers over land. His grandfather, John Bourden, was an inshore fisherman, and his father, Andrew Bourden, spent his life as a schooner captain sailing out of Twillingate. Born to Andrew and Sophia (nee Jenkins) in 1935, Eric made a living fishing for lobster, doing carpentry work and operating a school bus. END_OF_DOCUMENT_TOKEN_TO_BE_REPLACED

Born and raised in Little Harbour, Twillingate, Harry Pardy learned how to build boats from his uncle Harold. “First when I started it was all done by hand. Hand plane, hand saw, ax, drawing knife, spokeshave, hand drill and all that stuff. There was no electricity then.” Following in line with generations of boat builders, Harry built his first boat, a flat, in 1942.

END_OF_DOCUMENT_TOKEN_TO_BE_REPLACED

“We were fairly well isolated in Herring Neck. We thought this was the world here when we were growing up. Twillingate was big- you know, to make a trip to Twillingate would take a day almost to get there,” Max Hussey recalled.

Located on the northeastern side of New World Island in Notre Dame Bay, Herring Neck is composed of a number of communities including Ship Island, where Max was raised in the 1950s.

END_OF_DOCUMENT_TOKEN_TO_BE_REPLACED

Basil Gillingham was born in 1940 in George’s Point, Gander Bay and spent fifty years guiding on the Gander River. He learned how build boats at a young age by watching his father Leslie Gilllingham.

In Leslie’s earlier days, these boats were double-ended and propelled primarily by a black spruce pole. “To get Gander you’d have to pole up the river and then get the train from Glenwood,” says Basil, “and it would take you three days.” Today, the trip from Gander Bay to the town of Gander can be done in less an hour by car.

Basil built his first Gander Bay Boat when he was 16-years-old and has built over 100 of them since. “There were a lot of boats built here in Gander Bay, and a lot of people built them. Older people now, a lot of them are gone, and there don’t be many built anymore.”

END_OF_DOCUMENT_TOKEN_TO_BE_REPLACED

Lester Vivian was born in 1932 in Gander Bay, Newfoundland. By the age of sixteen, he had learned how to build Gander Bay boats and began to work on the Gander River. “The river was our highway,” Lester says, and served as the primary route between Gander Bay and Glenwood until the Trans-Canada Highway was completed in 1962.

“It would take two days to get to Glenwood before motors,” says Lester about his father’s generation. Without a motor, rivermen used paddles, a pole, and a sail on the centre beam, “if the wind was right.” Lester’s father got his first motor in the 1940s – a 3.3 horsepower Evinrude.