Each spring when crews arrived, they would spend time onshore building fishing stages, flakes, boats, and other structures required for their seasonal fishing stations. Due to this demand, fishermen began to stay through the winter.

During the seventeenth and eighteenth centuries,  Poole’s economy was dependent on fish that was caught, dried, and salted in Newfoundland and shipped to markets in the Mediterranean. For Poole merchants, this process was highly profitable and eventually led to the establishment of year-round premises in Trinity Bay, including Scilly Cove.

Early fishermen did not market their own fish. Rather, they had to depend on merchants who provided supplies and took their catch in payment. The fishermen of Scilly Cove  in the 1700s traded their fish with Joseph White and Sons of Bay de Verde, NL, Old Perlican, NL and Poole, Eng. After the French Raids of 1696, this firm moved to a safer location in Trinity and Scilly Cove became a fishing station for the merchants of Poole, England and Trinity, Newfoundland.

This pattern of life changed little until the middle of the twentieth century: men built boats and caught fish, while women assisted with curing the fish, gardening and other domestic jobs. In the winter, wood was harvested for boats, barrels, houses, stages, flakes and furniture. The carpentry skills within the community were noteworthy and boats built in Scilly Cove were renowned throughout the Avalon Peninsula.

By the end of the nineteenth century, dependence on Trinity decreased as the local merchants became established and successful at marketing the fish and outfitting fishermen. One of these merchants was E.J. Green. This family-owned and operated business opened in Scilly Cove in 1905 and remains in operation today under the name Green Seafoods Ltd. Prior to the Cod Moratorium in 1992, Green Seaford primarily processed Atlantic Cod but has since expanded to include shellfish and other species. 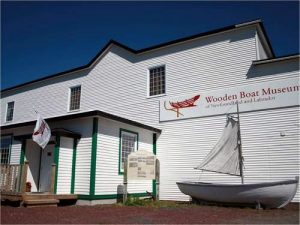 In 1912 Scilly Cove was officially renamed Winterton to honor of Sir James Spearman Winter, former Prime Minister of Newfoundland, who passed away one year prior. Home to the headquarters of the Wooden Boat Museum of Newfoundland and Labrador, the town has a population of approximately 485 residents (2011 census). Fishing continues to be the primary economy, with Green Seafoods Ltd. keeping many residents employed through fishing or processing, while 0thers commute to work in urban centers, such as Carbonear.

[For more photographs, click here to visit our online exhibit.]

One thought on “Winterton”