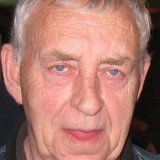 Ed was a master builder of wooden boats, among the last surviving artisans of the trade.

The skill was honed and passed on from his father, Raymond, and grandfather, Edward, who were respected boat builders in the since-abandoned outport of Wild Cove on Fogo Island.

He married Valda Freake of Joe Batts Arm on Fogo Island in 1954, and they had five children, four girls and a boy. As a child, Ed attended a one-room Anglican school in Wild Cove, a community of just 13 families on Fogo Island.

Over his lifetime, Ed built more than 30 wooden boats including trap skiffs, fishing motor boats, punts and even a tuna boat. He built his first punt over the winter of his 17th year, on the porch of the family home. When spring arrived, he cut a hole in the porch to release his creation.

He built a 22-foot motor boat for Peter Carson of Tilting in a time that might have qualified him for the Guinness Book of Records. Including the installation of a make and break engine, he had the boat on the collar in an incredible 18 days.

Building wooden fishing boats, from schooners to punts, dates back in Newfoundland to the arrival of the first Europeans.

The history of Newfoundland and Labrador is entwined with wooden boat building.. It is the oldest artisan practice in North America. When Toronto was still a French trading post, hundreds of wooden fishing boats were being built in Newfoundland.

For 350 years, the most essential item for living on Fogo Island was a fishing boat, which in the early days had to be rowed to the fishing grounds. While fibreglass and steel have overtaken wood for constructing fishing boats, the artistry, elegance and utility of wood has never been surpassed.

Ed could conceptualize a boat in his head. He would build a one-inch to one-foot scale model, then go into the woods and use the mental picture of the boat to find just the right naturally curved wood for stern posts, stems, knees, timbers and deadwoods.

With wood in hand, he would go from model scale to full scale to create a boat ready for the North Atlantic.

Building a boat with your hands without written plans is comparable to a gifted pianist playing the most difficult piece of classical music without a written score. The ability comes from inside the person, and Ed had the gift of boats inside him.

He and his forebears made it possible to settle in Newfoundland’s outports. He was one of those people who, through his work, helped build this country.

Gordon Slade is a friend of Ed.