“There was a guy that built boats. His name was Clayton Learning. And he gave me a few tips for how to build the first one. That was it,” said Cartwright boat builder Howard Mesher. Born in nearby Paradise River, Howard moved to Cartwright in 1953, at the age of seven. He built his first boat when he was eighteen. 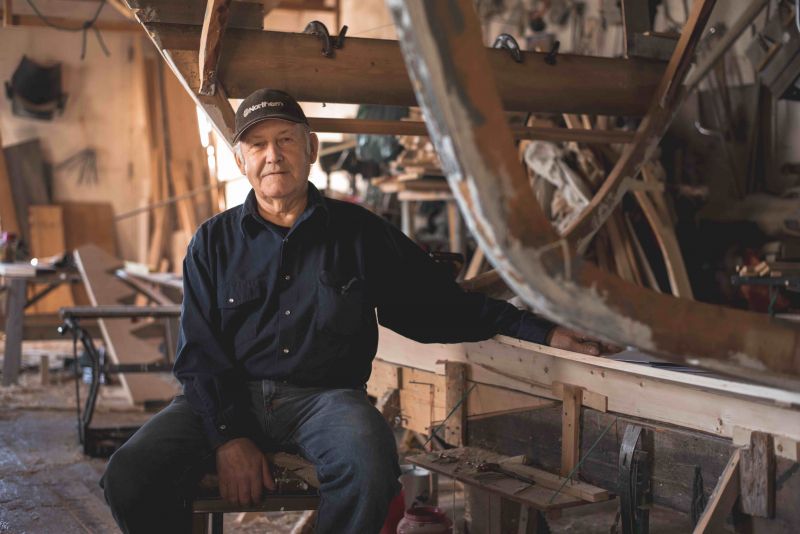 “The first few I built were completely clinker,” Howard said, “like Bruce Martin and Clayton Learning when they started building those boats. They were probably the original guys to start building [these] speed boats.”

Those early speed boats were modifications of the traditional clinker planked rowboats found in the area, adapted to be fitted with outboard engines that were increasingly available. Eventually Clayton Learning and Bruce Martin settled on a combination of clinker and strip planking, which came to be recognized as the regionally unique Cartwright speed boat.

“I’d always be building boats in the springtime of the year. Then of course we had to get ready for fishing too. One year in particular I was pressed for time, and I had to build a boat for a guy who fished up in Battle Harbour. A twenty-two foot boat. And I didn’t have much time. I built her in 8 days. That was the record.”

Howard settled on the strip planking method when building speed boats, with the addition of a spash rail, a strip running along the hull above the waterline from stem to stern. This spash rail worked the same as the lapped plank would have to minimize spray. “I change my design. Every several years it slightly changes.

One thought on “Howard Mesher”