Jack estimated he has built around fifty boats— mostly speed boats — and dozens of models. “I grew up with boats. I got from the cradle into a boat… No cars around then, not where I grew up.” Jack said.

He learned how to build boats by watching and helping others. “A cousin of my father [Gideon Lane] lived next to us [in Englee]. I used to spend a lot of time with him. He built two twenty-eight-foot trap skiffs in one winter… Everything was by hand then. You either chopped it or planed it or sawed it. It was all by hand.” 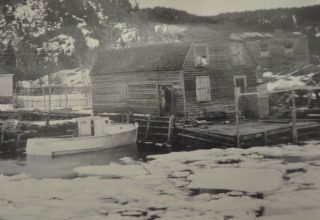 First boat
“I built that on Exploits in 1961… She was twenty-five feet long and everything was done by hand.”

In addition to building boats, Jack worked a variety of jobs, mostly in logging, construction, carpentry. “[The] first time I went in the woods I was fifteen years old,” Jack said, “That was in Englee. Cutting wood and hauling it with a dog team.”  Jack also spent time working as a mechanic in logging camps; did maintenance with the local school board; operated a pilot boat on the Exploits run; used a horse and cart to deliver water to workers building roads; travelled from Main Brook to Hampton, a distance of 225 kilometres (140 miles) by water, with a screen and projector to show movies in communities along the Northern Peninsula; and once worked with a dentist to make false teeth for the Grenfell Mission in St. Anthony.

“…I loved it in cutting wood. It was hard work and a lot of flies, but I didn’t mind it…”

One thought on “Jack Lane”