Roy Dennis was born in 1932 in the community of John’s Beach, in the Bay of Islands on Newfoundland’s west coast. Like his father Joseph, Roy grew up fishing for lobster, herring and cod. He built his first boat at age fourteen, using the skills he had learned from his grandfather.

The Dennis family have been building dories in John’s Beach since the 1880s.  From this time, until the early 1960s, the Dennis family built dories from two family sheds on the beach at John’s Brook.

“Well, my grandfather, he had a big store down the shore and he always used to build row dories, and I used to be down there fooling around. When he quit (well, he was old then) and I said to him ‘Can I build a dory down in your store?’ ‘Yes!’ he said, ‘Go ahead!’ … He had the shape of the moulds and everything then, the shape of the bottom… Shelburne dories or something back in them times. I used to be down there watching and watching him at it and then I started! That’s when I built the first one; I was fourteen. Ever since then, I’ve been building dories.”


Roy finished school and started working by the age of eleven. “I only got grade five and I had to go to work because the old man wasn’t that well,” he said, “I went fishing then.” Roy started fishing with his uncle Les Dennis in a row dory before purchasing his first engine – a Viking outboard – around 1955. “I lobster fished for forty-nine years,” he said, “In between that we were herring fishing and cod fishing.”

“We used to fish in a place… a place called Molly Ann’s Cove. That’s where we always lobster fished and we had our cabin there and everything. When the season would open in April, we would go there and you’d stay until the fifth of July when lobster season closed. It was good, but it was a rough place. Right on the shore, right open to the ocean.”

In addition to fishing, Roy also worked in carpentry and a variety of other labour jobs. “Wherever there was any work, that’s where you went,” he said. Since retiring, Roy has built dozens of model dories and miniature lobster traps. 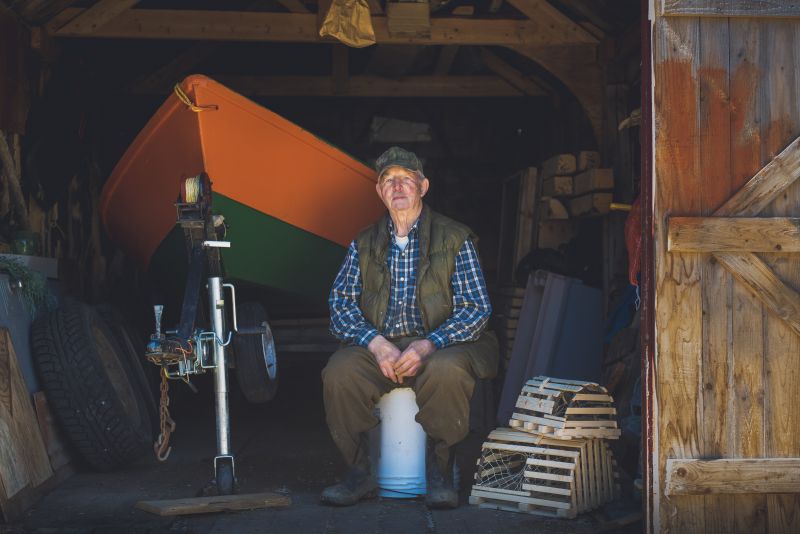